Established in 1434, the University of Catania is the oldest in Sicily. The king of Spain, who at the time was king of Sicily too, authorised the foundation of a studium generale with the privilege of granting bachelor’s degrees and licenses to students of core disciplines such as theology, canon law, civil law, medicine, philosophy and liberal arts (literature). However, it was not until the recognition from Pope Eugene IV ten years later that the university was officially established in the city of Catania.

Prior to this, the main centres for education in Sicily until then had been Palermo, Messina and Trapani. None of them, however, held the right or the power to confer degrees which could only be conferred by the Pope. 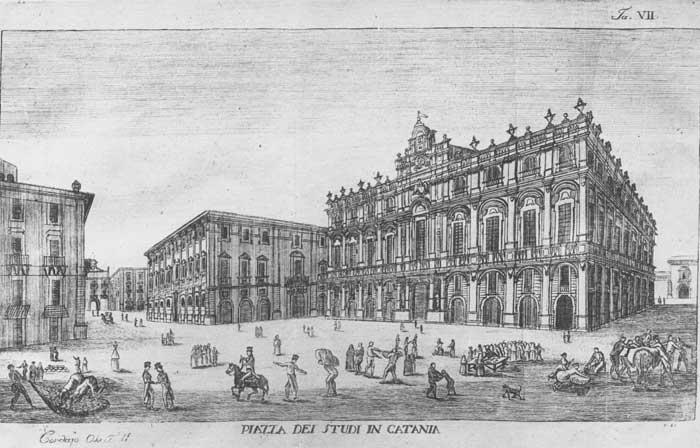 In 1444, the first schools of Medicine, Philosophy, Canon and Civil Law, Theology and Arts were finally established. Students began to attend classes in 1445, although it was not until two centuries later that the university laid its foundations in Piazza Università, where it still stands up until today.

Its building was formerly occupied by St. Mark’s Hospital, which was completely struck and destroyed by the 1693 earthquake, and as a result students were left out without a place for their studies. Before it was rebuilt, some resourceful students, who were filled with endless determination and were also completely untroubled by such events, moved their classes to wooden huts near the harbour.

The new (current) building, designed by Giovan Battista Vaccarini, is a magnificent as well as exemplary monument of Baroque architecture.

Not only was the University of Catania structurally powerful but it also held the exclusive right by Royal Decree to grant degrees within the Reign of Sicily. Although the hierarchical powers of the university were until then in the hands of the Church, at the beginning of the 18th century, the Rector, like in all ancient universities, began being elected from final-year students and was the acting protector and advocate for students themselves. Plus, they would be granted other privileges too.

Twenty-five bell chimes from the Cathedral would mark the beginning of each academic year and throughout that time frame, a porter was supposed to check the presence of each professor. Those who did not appear to be working were reported to a notary who would take a day out of their wages. At the end of their studies, students were awarded their degrees along with a gold ring at the Cathedral where they also received a blessing from the Archbishop. Although this ceremony and many other traditions have fallen into general disuse, the academic organization is still as strong today as it was in the first half of the 15th century when it started out with just ten students.

Plenty of historical university buildings are spread out in the old city centre, in stark contrast though with the modern, hi-tech campus La Cittadella. UNICT offers an attractive portfolio of academic titles and is strongly committed to the creation of modern laboratories where the ancient Mediterranean culture meets most modern and state-of-the-art technologies for advanced training. Students who wish to undertake an undergraduate degree programme will indeed receive high-quality education. Excellent support services are offered across the university’s departments, even in the city of Syracuse and Ragusa that still belong to the headquarters based in Catania. They are both culturally dynamic and suitable for students and individuals who love to mingle with the university community as a whole.