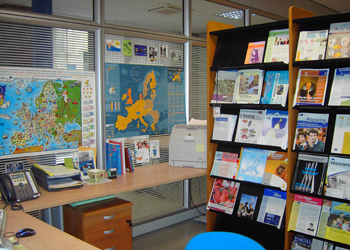 The European Documentation Centre Network (ECDs) was set up by the European Commission in 1963 with the purpose to identify the needs of researchers, students and citizens. Therefore, EDCs are contractually entitled to receive, free of charge, most publications of the European Communities institutions. There are now more than 600,00 such centres, mainly located in universities. A Directory of EU information relays and networks lists the addresses and other details of members of the EDC network (website).

The European Documentation Centre of Catania was established in 1996 through a Convention, renewed in 2005, between the University of Catania and the European Commission. Catania’s Centre aims at being an operative tool to promote and develop communication, information, teaching and research in the field of European integration in the territory. Its objective is to make information on the European Union and relevant policies accessible to the specific and general public.

It is a monthly document, including all the updates related to:

The EDC, in collaboration with the University of Catania, is interested in the redaction of the periodical “I Quaderni europei”. This on-line collection is divided in six sections (legal science, economic science, political science and international relations, linguistic and literary science, energy, special series for single events) and contains the most interesting contribution on the European integration written by Italian and Foreign academics. The aim of the periodical is to contribute to the European integration debate from an interdisciplinary perspective. The papers are only available in electronic format to the following link: http://www.cde.unict.it/quadernieuropei. To contact Redaction Committee please send an e-mail to cde@unict.it

This section contains the articles and editorials notes of researchers about the integration process of European Union. To request the publication of an article please send an e-mail to cde@unict.it

The Centre hosts and supports research groups of experts in the field of European Union Law and other areas involved in the study of European integration process.

The results – interim and final – of the research groups, as well as the acts of the study meetings organized are collected and published in the periodical “I Quaderni europei”, in order to ensure the dissemination of knowledge acquired.

Organisation of seminars, conferences, debates on European issues to academic and general public

The Centre organizes events in collaboration with the University of Catania, others national institution, public and private body, EDC Network and within projects of this Network with the contribution of European Commission Representation in Italy.

The Centre is closed over Christmas and New Year and on public holidays, and is normally closed during the summer holiday period, from late July to late August