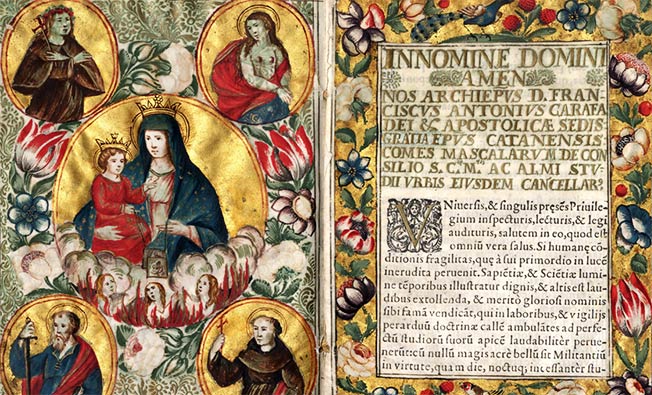 Established in the 1950s, this particular library, which used to be referred to as "Juridical Seminar", had the primary aim of providing an organic collection of bibliographic tools to all scholars and legal practitioners who might have had an interest in it.

The historical section of the Library belongs to the SiMuA (name for the university museums’ network) because of its value and rarity - and yet because of the cultural heritage that it actually preserves. A vast fund of common and modern law material consisting of 5,000 editions from the 15th to the 18th century is presented along with a great collection of microfilms reproducing legal manuscripts and printed works from the Middle Ages that have been preserved in European and American libraries.

The ancient collection and the one available on microfilm bear witness to the history of European Law and that of the Ibero-American “New World”,  about halfway through the Middle Ages (between the 12th and the 18th century), in which case characterized by a unitary and supranational legal system that ended as soon as the nineteenth-century States appeared on the horizon, undergoing a process of national and cultural reconfiguration.

A nearly complete collection of the most significant works of the European legal culture from the sixteenth to the nineteenth century, combined with a microfilm collection of medieval codes preserved in libraries all over the world, have significantly contributed to the making of the Library, hence a recognised landmark for international law scholars.