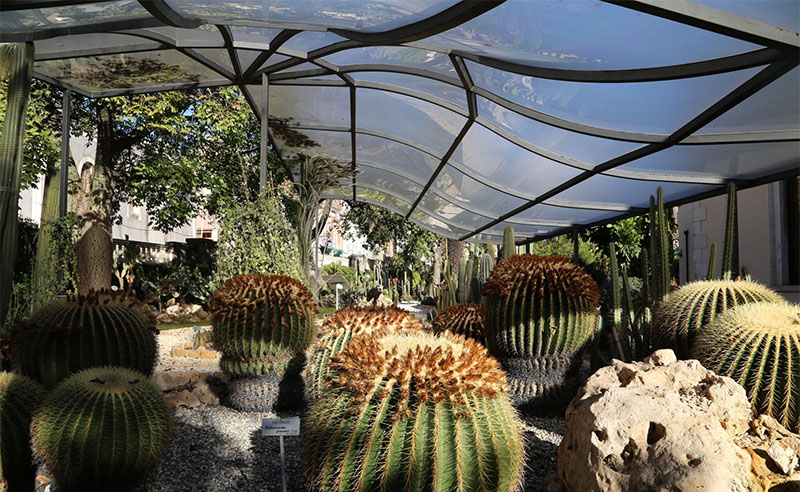 Francesco Tornabene, at the time professor of Botany at UNICT created Catania’s Botanic Garden in 1858. The garden still preserves its original nineteenth-century layout and is divided into a universal garden (Hortus Universalis), in which exotic plants are grown and into a Sicilian garden (Hortus Siculus) for the cultivation of Sicilian native species. It was possible to rebuild some of the most representative natural habitats of Sicily (rocky coasts, dunes of sand, woodland, lake environments) because the Sicilian garden’s land slopes down gently. Because of its endemic species, the Sicilian garden is replete with some true rarities worth mentioning: the Sicilian zelkova, the Ptilostemon greuterii and the Dianthus rupicola.

As for the Universal Garden, its setting is much more formal. Flower beds are arranged geometrically with a symmetry that is determined by the orthogonal intersection of the main avenues. There are three tanks for the cultivation of aquatic plants, the largest of which is divided into radially arranged compartments and a large tropical greenhouse (Tepidarium).

Among various collections, that of succulent plants, with an approximately 4,500 specimens, is probably the richest one. These are Cactaceae, Euphorbiaceae and Aizoaceae mostly grown in the open field. The most significant specimens are however some large Cereus, several centuries-old Echinocactus grusonii and numerous species of the gen. Mammillaria. The collection of palm trees (from the Arecaceae) is distributed across various sectors of the garden and includes over a hundred species grown outdoors. Among the oldest and most valuable specimens are Butia eriospatha, Trithrinax campestris T. brasiliensis, Erythea edulis and Jubaea chilensis. Other important collections are the Gimnosperme (e.g. Pinaceae, Auracariaceae, Zamiaceae, Ginkgoaceae,), very primitive plants dating back to the Mesozoic era, along with frangipanis and officinal plants.

Temporarily closed to the public